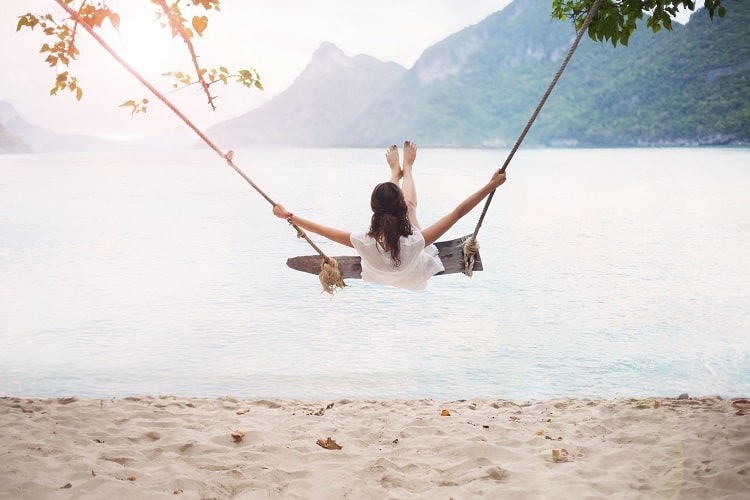 The financial independence number is a benchmark to determine retirement preparedness. It’s also known as the FI number.

Financial independence is achieved by:

The financial independence number is the target lump sum. Calculating the amount answers the question, how much money do I need to stop working full-time?

Though not perfect or set in stone, there’s years of data and research behind using this single number to help determine the long-term viability of a retirement nest egg.

The financial independence number works fine as a baseline guidepost, but most people should tweak it to optimize long-term objectives and plan conservatively in preparation for the unexpected.

This article explains the origins of the financial independence number, how to calculate it, and ways to customize it for your planning purposes.

Origins of the Financial Independence Number

The origins of the financial independence number go back to the 1990s and the work of an advisor named William Bengen. Later, three professors at Trinity University published a paper about safe retirement withdrawal rates building on Bengen’s analysis.

The three professors looked at stock and bond data from 1925-1975. They concluded that over any thirty years during that period, a retiree could safely withdraw 4% of their total assets per year without running out of money.

For example, if someone entered retirement with $1.5 million of invested assets, they could withdraw $60,000 per year for living expenses for the next 30 years. The person would have a >98% chance of a solvent retirement.

The paper became known as the Trinity Study, and its conclusion is the basis for the 4% rule of thumb, which we use to calculate the financial independence number.

If history is any guide for the future, then withdrawal rates of 3% and 4% are extremely unlikely to exhaust any portfolio of stocks and bonds during any of the payout periods (from 1925-1995).

The 4% rule of thumb has become a crucial retirement planning tool for advisors and individual investors.

Analysts have replicated the study many times since, using updated data and coming to similar conclusions. An advisor and influential blogger named Michael Kitces is one of the more prominent modern researchers.

His recent appearance on the Bigger Pockets Money Podcast is an excellent overview of the 4% rule of thumb and other planning strategies.

How to Calculate Your Financial Independence Number

This formula serves as the baseline, but most people should consider adjusting the number for their personal situation.

To calculate the number, first determine annual spending. Count total expenditures for the year or average monthly expenses. Be sure to add estimated post-employment healthcare expenses since employer benefits will cease in retirement.

My preference is to use bank account data and a spreadsheet to calculate annual expenses using Excel pivot tables.

You can also use a free automated tool like Mint.com or Personal Capital to track spending automatically.

The total is the financial independence number or FI number.

We’ll use $75,000 annual spending in the examples throughout this post.

The goal is to save this total lump sum by aggregating all investments, savings accounts, and other investment equity. Once you’ve hit the number, you’ve reached financial independence.

Use it as a wealth-building measuring tool to track your invested assets as a percentage of your financial independence number (see chart at the bottom).

But do not consider the FI number as an absolute end goal because there are many other factors to consider.

What are Invested Assets?

Total invested assets is different than net worth.

Some people simply calculate their net worth and use that to measure progress toward financial independence. That’s easier but less accurate.

Remember, the goal is to build a lump sum of savings and investments (or “invested assets”) equal to the financial independence number.

For a better picture, exclude the equity value of your primary residence and other non-retirement funds such as college savings accounts.

Do include the value of equity in investment real estate properties or other assets you can liquidate to buy other income-producing assets.

Furthermore, if you generate after-tax income from investments stocks, bonds, or real estate, you may choose to exclude the underlying assets from your invested assets calculation and reduce your financial independence number — more on that below.

How to Customize Your Financial Independence Number

One of the more notable takeaways about the 4% rule of thumb from the earlier-mentioned podcast with Michael Kitces is:

That means the 4% rule of thumb is a conservative benchmark meant for the most risk-averse.

Those willing to accept more risk can withdraw a bit more, say 4.5%, and still have a good chance of maintaining retirement security for 30 years.

That said, 4% may be too risky for early retirees.

The 4% rule works over 30 years. For someone in their 60s, it’s likely to last the rest of their lives.

But for early retirees in their 30s, 40s, or 50s, 30 years may not be a sufficient planning horizon.

Thus, a more conservative 3%-3.5% withdrawal rate may be more appropriate for those with a longer life expectancy or want to leave a financial legacy.

Reducing the withdrawal rate is one of the most effective ways to reduce risk.

Another way is to reduce annual spending.

There are other ways to customize your financial independence number by accounting for additional income or income-producing assets.

I’ve written specifically about how I measure progress toward financial independence using the F12MII number from my Portfolio. Below is a more general description of how to modify the number.

People sometimes over-estimate how much they need to retire and keep working a job they don’t love.

If you expect to receive income after retirement, you can reduce your financial independence number and bump up your retirement date.

The most obvious additional income stream in the U.S. is Social Security. Younger folks like to plan for retirement without Social Security because of doubts it will exist.

Despite politics and deficits, all Americans should expect to receive Social Security when they reach retirement age.

Using the previous example of $75,000 in annual expenses, you can now calculate your financial independence number using an adjusted spending basis. The additional income covers a portion of the spending.

That shaves off several years of work if you follow the 4% rule of thumb and don’t mind relying on the government as part of your plan.

The lesson here is that a little bit of additional income goes a long way.

Invested capital that produces income is a bit different.

When I write about income-producing assets and building income streams, I’m usually referring to investments that create passive income. These investments include dividend stocks, bonds, traditional and crowdfunded real estate, certain business income, and other savings.

If you adjust the financial independence number down due to income-producing assets, you should consider subtracting the underlying asset amount from the pool of available safe withdrawal assets.

The $200,000 should not be included in your total invested assets aggregation if you reduce the financial independence number.

Here’s a side-by-side comparison building on our previous example. The first is calculating the FI number without adjustments. The second adjusts for the dividend portfolio.

The second example shows slower progress as measured by percentage to financial independence.

So why reduce the FI number by $150,000 when you could be $200,000 closer to your initial target? What’s the benefit of making this more complicated?

For planning purposes, you can do it either way. But most of us are more concerned about a secure retirement rather than a more imminent one.

Using this method accounts for assets we don’t plan to liquidate.

Building and maintaining sustainable income streams will help to prolong retirement security without the sole reliance on withdrawals.

Years ago, when I set a goal to retire at age 55, I expected that I’d be able to generate enough passive income from dividend stocks to fund my retirement lifestyle.

Now that I’m 45 and my retirement account balances have soared, I can retire sooner by using a hybrid approach to funding my retirement.

I’ll rely on both sustainable income from dividends and real estate, and I’ll tap my tax-advantaged accounts when I reach age 59 1/2.

Since this realization, I’ve customized my financial independence number to account for income-producing assets that I don’t intend to liquidate. The extra calculation complicates the equation a bit, instead of just using 25x annual spending.

But it serves me better, giving me a thorough picture of what I need to accomplish to reach F.I.B.E.R.

Below is a chart that I’ve been plotting since November 2018. It shows my net worth (green) and invested assets (red) as a percentage of my financial independence number (purple).

I calculate my annual expenses for the calendar year. The sharp drop in December is due to increased spending in 2019. 2020 looks to be a less expensive year due to the health crisis, so I anticipate seeing an improvement in December. 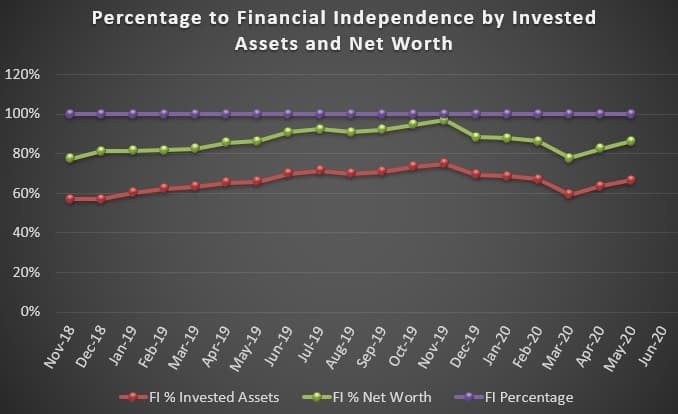