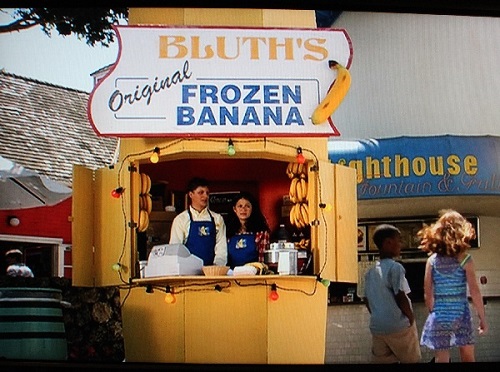 Arrested Development was an early 2000’s TV comedy loved by its fans. Despite critical acclaim, it failed to gain traction and the show was canceled after three seasons.

and its grassroots fan base. Challenged with cast schedules, the fourth season on Netflix was not a huge success.

Mrs. RBD and I barely made it through the whole fourth season an never tried the fifth.

I didn’t watch the show when it originally aired, but Mrs. RBD turned me on to it while we were dating and we binge-watched the three seasons together. It’s an absurd but excellent piece of comedic work.

One of the main plot locations of the show is the Bluth Family Frozen Banana Stand. The banana stand was started by George Sr., the patriarch and founder of the family real estate development business.

When the family business was struggling, George Sr. assured his son Michael, “there’s always money in the banana stand”. The phrase invoked security, as in the banana stand was a stable cash flow generator and could help carry the business through hard times.

But George Michael (son of Michael) realizes the banana stand is actually losing money and wants to burn it down. Michael, not wanting to micro-manage his son (like his father did), decides to help George Michael burn the stand down to spite his own Dad’s meddling. He also thought his brother G.O.B. had sent in the insurance check.

Talking Big Ideas While on Vacation

Even with three kids constantly nagging us and fighting off sunblock application, I know of few better ways to relax with the family than a beach vacation.

Beach vacations are so great in fact, it’s hard not to be depressed when you return home and head back to the office. So I don’t return from vacation depressed, I like to talk about big ideas like goals and long-term plans with my wife during our week away.

Long car drives are a great opportunity to have these conversations. One topic that came up on our drive was our condo rental. I’ve owned the condo since 2006. For the last five years, it’s been a cash flow positive real estate asset for us. I’m strongly considering selling it as I expect our excellent tenants to be moving out soon.

I wrote about all the pros and cons of selling in the post Should I Sell my Condo Rental?

When I penned that blog post, I was about 70% in the yes column that we’d sell the condo when the tenants move out.

After speaking with my wife during our vacation, we’re now probably closer to 50/50.

Because Mrs. RBD was more positive on the condo than I thought. My thinking was we’d take the proceeds of selling the condo and make some improvements to our primary residence. Mrs. RBD likes that idea too. Then we’d keep a stash of cash in a savings account and take our time deciding what to do with it. $100,000 of cash in the bank can do a lot of things. Most of all, it would provide us flexibility.

Mrs. RBD made some points that, frankly, I didn’t think she thought much about. For example, she said something to the effect of, “well, many wealthy people tend to own more than one property.” That’s probably true.

The longer we hold onto the condo, the more equity we’ll build through having a tenant pay down the mortgage, and the more value is created through appreciation. She also pointed out that the condo takes up very little of my time. And if we ever really needed the money for some reason, we could always sell it and pull out the equity.

We have some security blankets built into our financial lives, so it’s hard to see a scenario where we’ll need to tap the banana stand.

But you never know. If something expensive happens, we could always ask the tenants to move out and sell.

To date, appreciation has been nil. I bought the condo after the real estate bubble popped (late 2006), but before the mega financial crisis. The price seemed favorable at the time. The same unit would have sold for $30,000-$40,000 more six months earlier. But had I waited for another year to buy, I probably could have gotten a similar unit for $30,000-40,000 less than I paid.

Prices have since recovered from that mess, but not excessively so for old condos in my area. With an updated kitchen, I believe we could sell the unit for $10,000-$20,000 more than I paid for it.

The real windfall from selling it is the equity tied up in the property.

The return on investment (ROI) on the equity in the condo is quite poor. So the chunk of cash is probably better suited to generate cash flow elsewhere.

But just how much equity is in the condo?

That’s actually not an easy question to answer. The US tax code is quite complicated for selling assets that were used as investments. Cost basis and depreciation recapture are two tax code animals I did not want to tame.

So to get a better picture of the equity in the condo, I hired a CPA to do a sale analysis. The basic answer I wanted to know was, if we sell the condo this year, how much money would we walk away with?

For $500, it was well worth the investment. I’m now armed with the information I need to make the best possible decision.

As I expected, if we sell the condo, we’ll depart the closing with a sizable chunk of cash. At least $100,000, depending on the sale price, (of course), and how much, if any, we put into upgrading it before the sale. Upgrades could include a full-blown kitchen and/or bath renovation costing anywhere from $10,000-$25,000. We’ll need to consult an agent on whether that makes sense or not.

The CPA pointed out some important points. Namely, how to calculate the cost basis by accounting for improvements that were made before I started renting it. Also, it turns out depreciation recapture won’t have any impact unless it sells for well above what I think it’s worth.

The analysis provides a lot for me to think about. I’m mostly happy with the outcome, which confirms what I believed. That is, if we sell the condo, we’ll have a lot more cash on our hands, and the taxman won’t get to put his grubby hands on too much of it.

Selling would bring us peace of mind, simpler financial lives (particularly at tax time), and less overall responsibility. Though I’d miss the income it generates and the monthly increase in my net worth.

We have a sufficient insurance policy on our banana stand. If it burns down, we won’t be out $250,000.

When we do sell, the $100,000 + in cash could be used a number of different ways. We could improve our primary residence, invest it, or keep it for a rainy day.

One of my goals for 2016 was to develop a plan for a “near-term, pre-retirement lifestyle adjustment”. I have not completed this task yet, but I think a lot about it.

The idea is that once our kids are all in elementary school (about four years from now), perhaps we could make a major adjustment to our lifestyle, where maybe I can ditch my 9-5 and pursue other work that is less time consuming.

And maybe Mrs. RBD can begin collecting an income through freelancing in her previous field of work.

The combination of our investment income, part-time income from both of us, a decreased cost of living, and lower taxes, could add up to a level where we wouldn’t need a stinkin’ job.

Selling the condo would immediately decrease my passive investment income, but $100,000 would give us a buffer we’d need to transition into a new lifestyle.

As it is, the ROI on the condo only yields about 1%. That number could easily be doubled through dividend investing, or possibly via interest on cash in the near-to-mid term. Or we could simply use it as a buffer to supplement our income as we build an alternate lifestyle.

Over time, our banana stand has shifted from a problem child (a la G.O.B.) to a reliable asset helping us pursue retirement.

Which brings to question, if it’s such a positive asset today, why not hold on for longer?

Photo credit: RBD – picture with my phone watching the DVD.