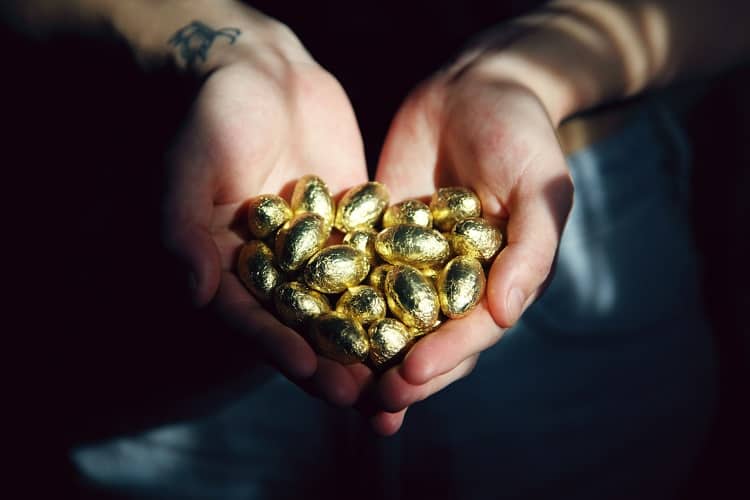 I used to work for a small IT company and reported directly to the owner.

After seven+ years of regular lunches, I started encouraging him to sell the company.

When times were good, we could grow the business. But my boss wasn’t willing to make long-term growth investments.

So revenue was only reliable to the extent:

It was a mediocre company with OK benefits. Once employees figured that out, they’d often leave for more established companies.

I stuck around for 14 years, but that’s another story.

Every time I brought up selling the company, he would say, “I won’t sell the company because I don’t think I can sell it for what I think it’s worth.”

My response was always, “it’s only worth what someone else will pay.”

He’d shrug in agreement, then take a second pass at the Ruby Tuesday salad bar.

The precise value of an asset is only realized when there’s a willing buyer.

All this wealth creation in the digital currency space has got me thinking about markets and price discovery.

I don’t have an opinion on what will happen to Bitcoin *, Ethereum, or Dogecoin next week or next decade.

These coins trade on marketplaces where buying and selling determine the prices.

Digital currency prices are speculative because there’s little to measure other than technobabble.

That’s been true since the first bitcoin was mined. Increased adoption and new money chasing profits have driven price increases to date.

Celebrity tweets and stakeholder commentary influence the prices too, which I find to be fascinating.

Since Bitcoin and Dogecoin are unregulated, influencers like Mark Cuban and Elon Musk can buy the coins and promote them without consequence.

Elon can buy a digital currency, tweet about it to his 50+ million Twitter followers to move the price upward, then sell and take profits when he likes.

This would work until people realize he’s doing it to prove a point (he doesn’t need the money).

Lack of regulation is one of the main appeals of these coins.

One of Bitcoin’s most convenient functions is to facilitate anonymous payments for illicit activity.

More U.S. regulation is likely around the corner, but there are no investor protections.

What matters most for sustaining the price of these coins is broad adoption. If there are no new buyers, the prices will not continue to rise.

That’s one reason why there’s a whole industry around Bitcoin cheerleading — bitcoin owners convincing more people that fiat currencies and centralized banking are broken or destined to be displaced.

And if enough people believe that digital currency is the future of finance, it may be so.

Cryptocurrencies may have sufficiently proven themselves as forever assets already.

Stocks trade on marketplaces too.

A big difference between crypto coins and stocks is that stocks have intrinsic value. Cryptocurrencies do not.

Intrinsic value is a measure of what an asset is worth.

When you buy stock in a company, you’re purchasing the present value of expected future cash flows and potential capital growth.

If a stock price falls, a profitable business will become undeniably cheap at some level. Someone will step in to buy it (unless it succumbs to debt).

Real estate investments have intrinsic value too, which is highly measurable.

Like cryptocurrencies, the U.S. dollar (a fiat currency) doesn’t have intrinsic value either. Still, it has the backing of the U.S. government, its tax authority, and the ability to print new money (a practice digital currency supporters criticize).

Nearly every human being on the planet is willing to accept the U.S. dollar in exchange for goods and services. There is already mass adoption and a few centuries of trust in the currency.

Though, that doesn’t mean it can’t fail someday.

A tiny fraction of the world’s population accepts bitcoin and other digital currencies as payment for goods or as a storage of value so far.

Adoption is growing — but I can assure you, my parents will never pay for anything with a cryptocurrency.

For What It’s Worth

Fiat money only has value if it is accepted. The dollar has a good record, but that’s not true for all currencies.

That’s one reason Bitcoin and other digital currencies are growing in popularity in developing countries.

Years ago, I crossed the Thailand border into northern Laos and exchanged a $20 bill. The exchange agent handed me a stack of bills nearly two inches thick.

The value of the Lao kip decreased compared to the dollar due to high inflation. But they hadn’t printed enough larger denominated bills yet to keep up.

I could use kip anywhere I went. I just needed a big stack.

Spending dollars was a useful way to receive a discount because local vendors stashed them to hedge against inflation.

Another hedge against inflation is gold, but it’s harder to acquire, transact with, and store.

Bitcoin is now compared to gold as a store of value, a term that’s become popular since it can’t scale for payment volume.

It functions better than gold (easier to acquire, transact, and store), but it suffers from price volatility, making it an unreliable store of value for now.

Gold has some intrinsic value based on its utility as a metal, which serves as a floor. But the value is greater than its utility because of its scarcity, beauty, and multi-thousand-year history as a precious asset.

If you own any bitcoin or other cryptocurrency or are thinking of trading or storing value in digital currencies, recognize that they will only ever be worth what someone else will pay.

Confidence in the enduring value of these digital currencies is everything.

For the record, I don’t own cryptocurrencies. Maybe someday I will.

I don’t own gold or precious metals either — mostly because I prefer income-producing assets and take some comfort in a company’s ability to earn profits and the 100+ year history of long-term stock market returns.

If I owned physical gold or an ETF such as the GLD, it might increase in value, but it wouldn’t generate any income.

Yield farming and decentralized finance/banking (DeFi) started to emerge in 2020, so crypto-assets can earn yield now, but it’s the wild west out there (read those articles if you want your head to spin).

Bitcoin, cryptography, the Ethereum blockchain platform, NFTs, and the unlimited potential for digital currency are exciting and not going away.

But guessing what other people think a digital asset will be worth in the future is not in my skillset.

My former boss finally decided to sell the company when a buyer came along and made an offer.

He regretted the decision to sell shortly afterward.

The deal involved an upfront cash payment, plus future payments contingent on the company’s ability to continue to generate revenue.

Turns out, the buyer was rightfully skeptical of revenue reliability.

Contracts started to fail, and employees were let go (including me).

The business was a big part of his persona, likely exacerbating regret. He was no longer the successful founder of a local IT company going to business dinners and networking events.

It was worth more to him than anyone would ever offer.

After selling, he had no obvious retirement plans and started looking for new business opportunities.

Last I heard, he was investing in cannabis startups.

Photo by Sharon McCutcheon via Unsplash
* I tried to follow the AP Stylebook guidelines for Bitcoin capitalization but probably failed.

AP Style tip: Bitcoin is a digital currency. As a concept, Bitcoin is capitalized. The currency unit, bitcoin, is lowercase.