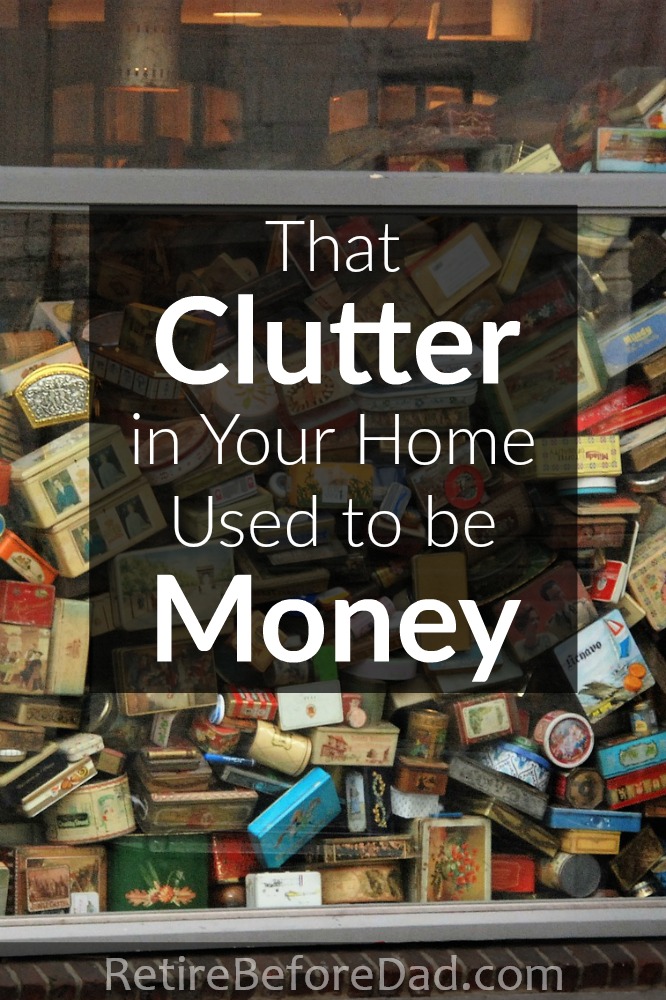 And I wish I had the money, not the item.

Most items aren’t worth money anymore. Even if they are, they probably aren’t worth the time needed to convert them back to cash via Craig’s List or Next Door.

When I see useless clutter in my house, I see a missed opportunity to save and invest — wasted money.

These things are a constant reminder to make better purchase decisions every day.

What to do About All that Stuff?

At one stage of my life, I lived out of a 40-pound backpack for 14 months. I’ve never felt freer than when I roamed the world with all my possessions on my back.

Since then, I’ve accumulated quite a few things. Most notably, four family members. And they collect things.

Admittedly, I don’t prioritize much of my time for eliminating household clutter. I’d rather spend it with my wife and kids and on my side businesses.

When I do, I’m not shy about donating or tossing stuff in the garbage.

Material objects become a lifelong burden. Once you own an object, it owns you until you release it from your life.

The more you own, the more it weighs you down.

Some items come with an emotional attachment. It’s hard to let go, but minimalism teaches us that letting go is what frees us.

I’m still trying to put that into full effect, but it’s tough with young kids who place so much value and emotional attachment to toys.

I don’t intend to be an extreme minimalist — just sensible.

New cars depreciate a few thousand dollars the moment you drive them off the lot. That doesn’t prevent me from buying brand new cars. I tend to keep them for ten years, and it balances out.

Depreciation on household items is much worse on a percentage basis.

For example, a few years ago I bought a drain auger for $25 to unclog my kitchen sink drain when I dumped the remnants of a soup stock into the disposal.

The 25-foot snake couldn’t break the clog that was 30 feet into the pipe. I had to hire a plumber which cost me $250.

The auger is still in my basement, taking up space until the next clog I fail to break. The moment I used it, the value dropped to a $5 yard sale item — on a good day. That’s 80% immediate depreciation. At least.

The better choice was to not use the disposal in the first place and buy this thingamajig to prevent the clog. Much cheaper.

But here’s what gets me. Most stuff we buy depreciates to near valueless the moment we buy it. But we hold on to so many items thinking either we’ll use it again, or that it’s still worth something and worth keeping until we sell it.

I rarely get around to selling anything because of the time commitment.

Three t-shirts sat in my drawer for two decades for this reason.

I had an original Late Night with David Letterman (not the more common Late Show) t-shirt that my Mom bought me in New York. Since the original show was off the air for so long, I thought I could sell it for money.

Maybe I could have, but not more than $20 or so if I was lucky. It wasn’t worth the time and effort to convert it to cash.

So it sat in my drawer for years alongside a pre-Dookie Greenday t-shirt and a vintage Toad the Wet Sprocket.

I should add, all three were two sizes too big for me — because 1993. So they were worthless to me otherwise.

I haven’t had a 25-ft drain clog since the soup stock incident. I finally donated the shirts to Goodwill last year.

Much of the clutter in our house is toys. Most of those were gifts — cash burned by doting grandparents. I’d rather they had saved the money too. Gifting one-quarter of the presents would bring an equal amount of joy to our kids.

We’re grateful for the outpouring of love for our kids. But it’s overboard (and we communicate this to the givers who are also reading this today).

Spending a week at the beach together? Now that’s time and money well spent.

When I look around my house at all the random stuff, I’m always surprised at how much of it was free, gifted, or cheap from an estate sale or flea market from back before kids made shopping so miserable.

There’s so much stuff we don’t use and don’t plan to use, but still keep. Some things are waiting for the next neighborhood yard sale like the endless stack of outgrown kids’ clothes. But most things are just sitting around without a plan.

Our son loved a big plastic toy doorway when he was a toddler.  His younger sisters sort of liked it, but not for long. For a while, it just took up space in our family room.

The day we unloaded to our neighbor, Mrs. RBD and I celebrated with a romantic dinner. Finally, the damn thing was out of the house, and we could vacuum again.

It was replaced by 40 new toys at Christmas time, each with 20-50 separate pieces that scatter around the room in chaos. But getting rid of the door was a small win.

A neighbor once dumped a bulky plastic race car track on our front porch. I’m sure she skipped home gleefully.

Receiving that race track was short-term high for my son. He loved it for a day or two. Then it sat in our basement play area for a few years.

It hurt like hell when you stepped on it, but it was too big to discard without anyone noticing.

Sometimes secretly throw out or donate toys and household items we don’t use.

Talk about excitement. Try this:

Here’s another favorite. When the kids fight over a crappy toy, they must throw out the disputed toy.

This is probably not a sound parenting technique, but it’s effective in reducing conflict. My daughter always wanted the toy someone else was playing with when she was younger. Now she’s a great sharer — so maybe my parenting strategy worked for once.

There’s a book for dealing with clutter and kids called Clutterfree with Kids: Change your thinking. Discover new habits. Free your home by Joshua Becker from Becoming Minimalist.

I bought it recently myself… the Kindle version. 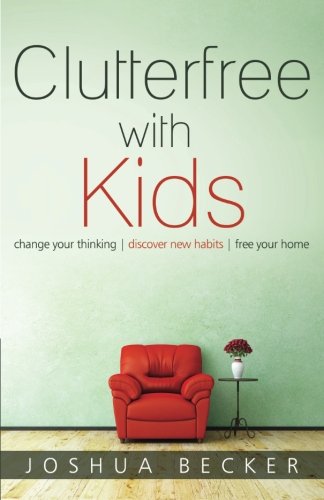 Avoid Putting Clutter in Your Home

The best way to avoid clutter is not to buy stuff in the first place. Make purchases on purpose. I’m not going to lecture you on this. Keep the money you earn.

Frugality, minimalism, and personal finance are so often intertwined. Earn more, spend less, and invest the surplus. Don’t spend money on crap that takes up so much space that you need extra space to store it all.

Spend money on experiences that bring you happiness, not things that give you or the kids short-term excitement, but end up collecting dust.

Accumulating less stuff to become wealthy is common sense, but against the traditional American dream, where you get the house, then the bigger house, and all the stuff to fill it.

Then all the cool gadgets like the fancy grill, the smoker (because a grill isn’t enough anymore), the bigger TV with the higher resolution, and the second TV for the room that needs a 60-incher too.

As for the free stuff, donate, sell, or trash it if you don’t need it around. Teach your kids to do the same, even the gifts from the grandparents.

We encouraged this at our annual neighborhood yard sale. Kids kept all profits from the toys sold. I can’t say they’re eager to sell their toys, but a few items sell every year, and the kids get paid. It’s a start. 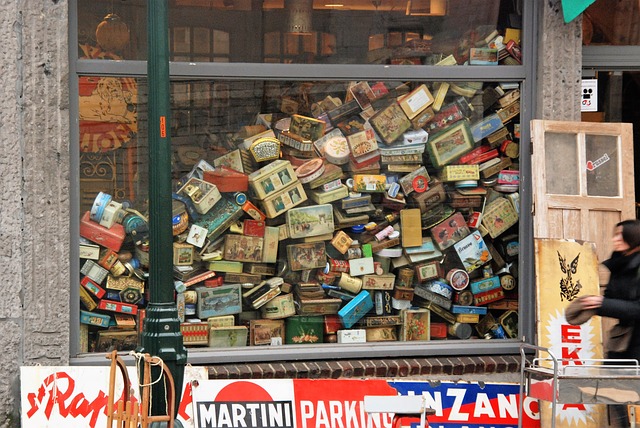