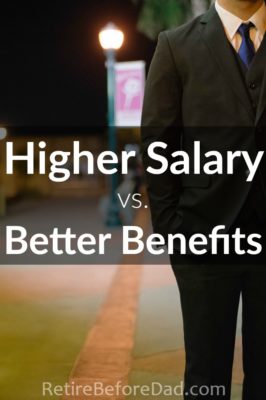 What is a more important consideration — higher salary vs. better benefits? As someone who has experienced the best of both options, I compare two below.

14 years with one company is a long time in today’s employment market. My tenure was never been about loyalty or career advancement, and it certainly didn’t earn me a gold watch.

The company paid me a salary above the market rate for the job I did. That’s why I stayed.

The benefits always lagged competitors. Benefits weren’t as important when I was single and childless.

But as the sole earner for our family of five, I decided I was done sacrificing my higher salary for better benefits.

Speaking to other employers and friends, I realized what a good benefits package looks like and should cost.

So I finally left my employer and started a new job with my ideal company.

Why were the Benefits so Bad?

Before I get into the details, I acknowledge I was fortunate to have an employer that had benefits and paid well. Not everybody has access to the same.

The local economy is strong and opportunities are abundant for educated IT workers.

The benefits I describe from my previous were bad compared to similar employers in the area.

Here are a few reasons why my former employer’s benefits were bad:

On top of that, we never had a dedicated benefits specialist. We had the owner and an admin. So every year, they pieced together a package that was suitable for them and kept their costs down but never considered everybody else. And they never compare themselves to competitors.

To make up for the bad benefits, the company pays higher salaries. But with high salaries come thin profit margins, and thus, no money left over to provide better benefits.

In a way, I was the walking example of why our benefits weren’t good. My salary was high and my margin was thin, so there was less to go toward improving benefits.

It’s a situation I struggled with for years.

Every year I received a salary increase. But I’ve never received a benefits increase. Most years, I got a decrease in benefits in the form of cost appreciation. Big ones. I know the cost of benefits is consistently rising for everyone, but the company disproportionately passed the costs onto its employees.

Aside from benefits, sometimes I wonder if working for the company for so long held back my career. Maybe I maximized my earning potential and should have left long ago. Leaving a position for a better one can be more lucrative.

For many years, I’ve believed my job was the path of least resistance to early retirement (NSFW), a job where I can earn the most for my efforts.

Working for a small company with a direct relationship with the owner did have some perks. Once, I asked for a $22,000 raise and got it.

If I didn’t like a company benefit, I told the boss. He listened.

The problem was I didn’t want to ask for better benefits. I wanted excellent benefits to be ingrained in the company’s DNA.

For example, I told my boss the 401(k) sucked. He didn’t understand why so I explained it. No change.

Then a year later I reminded him the plan sucked. He was shocked and upset that didn’t tell him earlier.

That’s what I was so relieved to find a better employer.

Being a spreadsheet wizard and numbers nerd, I looked at some hidden costs of my previous employer. I found some potential savings.

The cost of the so-so HMO plan for our family jumped $2,500 one year. The boss blamed politics, but he avoided the truth that bigger companies don’t take hits like that. Plus, they’re not afraid to swallow some of the cost.

To offset the higher health care costs, I opted for the lower cost dental plan. But later I found out no dentists in our area accepts the insurance for adults (only kids).

So I started to look at my health costs (which were well over $10,000 per year) and compared them to the healthcare cost of other similar employers. Google searching led me to some actual plan data, and an interview led to another. Then I asked a co-worker at a partner company to see their data.

I wasn’t surprised to learn that I could get a much better PPO health plan for my family for half the cost my so-so HMO. Or, a very good high-deductible plan with an HSA for a fraction what I pay now.

Next up is that dirty old 401(k). I lost thousands over the years because of the lousy fund selection and high fees. Nonetheless, I managed to save more than $300,000.

The 401(k) balance had to stay in the administering account until I left the company.

I was fully vested, so that’s not an issue. The problem was the fees. The expense ratios on the funds were 1.0% to 1.5%. So staying employed in that plan cost me up to $5,000 annually.

When I did ultimately switch employers, my healthcare costs dropped by more than half and the coverage was better. The 403(b) plan has more 200 fund options instead of 12, with plenty of low-cost options.

All told, I calculated that my benefits were worth about $20,000 more than my former employer. Crazy, but true.

Two Options When I was Still at my Former Employer

When I was still with my former company, I sat down with Mrs. RBD and told her I wasn’t thrilled with my employment situation. This wasn’t the first time.

I had a 14-year history with them, mostly on good terms. Prior to the job I was broke, unemployed and living with my parents.

But we often disagreed on how to run the business and my opinions were often ignored.

The company was always putting out fires instead of preventing them.

Part of creating a life of freedom, happiness, and purpose is to eliminate negative aspects of your life.

I told Mrs. RBD that 2017 would be the year I would leave. That turned out to be true as a left in October of that year.

But then something different happened!

#1 Stay and hope that a better company buys it

Most of the work I did I enjoyed. I was an IT consultant working for a large institutional organization. I interacted with smart people and solved difficult problems. The day-to-day customer interaction was fine.

But nearly every aspect of dealing with my company was unsavory. Added to my client work, I was asked to manage fifteen or so company employees. The task needed a full-time project manager and I recommended that, but the company wouldn’t make the investment.

#2 Look for something new

One problem is that my specialty is fairly narrow. I have significant domain knowledge of the computer systems of our end customer. Those skills are valuable, but only for their specific computer systems.

I built some expertise that is transferable outside of this end customer. But leaving may have been foolish because my skills are more valuable where I was.

My primary goal is to stop working full-time sooner rather than later. So starting a new career trajectory isn’t so appealing right now.

Turns out, another similar mediocre company bought my employer. They were unimpressive from the start. It was unclear if they were going to keep our current benefits or move us under the parent company.

Key admin people were subsequently laid off. This was a bad omen.

Then something forced my hand. The partnering company I worked under lost funding on my project and there was no longer any funding for my position. Instead of trying to work something out with my employer, I resigned.

That gave me four months to focus on my side business and spend quality time with my family before finding my ideal job. We lived off of savings and seven income streams that I built prior to leaving my employer.

Weighing salary and benefits will change depending on your age and life situation. Not long ago, the benefits weren’t an issue for me. Today, they mean a lot more. I’m supporting a family who relies on me to keep them safe and healthy. I’m there for them as a breadwinner and as a Dad every day after work.

Prior to early retirement, balancing earnings and quality time with family is difficult for some professions. I know an attorney who doesn’t see his kids many weekdays.

I don’t want to be that kind of Dad. Luckily for me, my profession provides a solid income and flexible schedule.

But there’s more. Benefits are more important as your family grows and everyone ages. I’ve waited too long to make this a priority.

Do you face a similar situation? Am I being too picky? Should I feel more gratitude toward my employer?