The department head at my job invited me into his office for a 30-minute chat when I first started.

We spent the time getting to know each other and talking about our past experiences and current roles at the company. Then he asked if was contributing the 403(b).

I live and breath this stuff so I saw it as an opportunity to show off my knowledge on the topic.

I said yes. But before I could go into my long-winded explanation about why I max out my 403(b), he said, “Good, because if you weren’t you might be too stupid to work here.”

Now, this comment was completely lighthearted and not meant to insult anyone who doesn’t contribute to their employer-sponsored retirement plan.

But our plan is so good, it really is a no-brainer. If you contribute just 2%, my employer will match about 10% after one year of employment.

One of the more popular posts on RBD last year was about making smart money habits a part of your daily life to build long-term wealth. When it came to the part about maxing out 401(k)s and retirement accounts, I guess I lost a few people according to the comments on Facebook.

Always take what you read in the comments section of Facebook with a grain of salt. But this one struck me as important.

Not everyone can max out their 401(k). Sometimes, there’s simply not enough money to cover monthly spending. This becomes especially difficult as your family grows and life becomes more complicated.

But’s it’s not as hard as it seems. Your take-home pay does not decrease by the amount contributed to a 401(k) per paycheck. Tax benefits kick in which ultimately make you wealthier each pay period.

The best advice I can give to any young people out there is to max out your 401(k) from day one. Always max it out and never stop.

That may not be so easy. I get it. I didn’t max out during the early stage of my career.  But maxing out your 401(k) each year should be the eventual goal. The sooner you get there, the wealthier you’ll be. According to the math.

In 2004, I was deeply interested in personal finance and investing. I knew the benefits of maxing out a 401(k). But I still didn’t follow the advice I read.

I max out my 403(b) now. But out of curiosity, I looked at all my pay stub data going back to 2004 and learned that I didn’t max out my 401(k) at my former employer until 2015. 15% per pay period was the maximum contribution allowed by my employer up to the annual IRS limit.

Here are the percentages that I contributed: 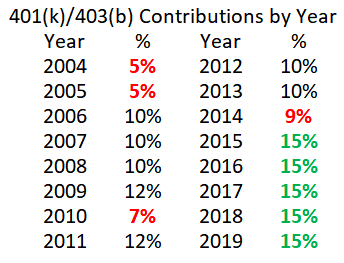 Compiling this data was hugely disappointing. Returns since 2004 have been excellent. Had I invested the maximum allowed each year, I’d be much wealthier today (even though the fund selections were bad).

Back in 2004, I guess I wanted more after-tax money to spend and invest and I figured I would eventually increase my contributions.

My lifestyle would have been the same had I contributed the max or not. But whatever I was thinking through the years, I didn’t take full advantage of the tax savings and I regret it.

For many, whatever isn’t contributed to the 401(k) is spent living paycheck to paycheck. So the 401(k) becomes a way to automatically save and not spend. That’s one reason why maxing out a 401(k) is so powerful, on top of the tax advantages and investment returns.

The maximum percentage of your paycheck you can contribute is determined by your employer. 15% is a common limit associated with maxing out a 401(k). But employers have to option to allow you to contribute quite a bit more per pay period.

If allowed, and if you were to contribute 75% of your salary to your 401(k), you’d most likely hit the maximum limit well before the end of the year. This is called front-loading.

That’s why most plans with a match encourage you to contribute throughout the year by only matching a small amount each period.

Another 401(k) limit to keep in mind is the defined contribution plan limit. This number increased to $66,000 for 2023, up from $61,000. It’s your maximum contribution plus what your employer can contribute. It’s particularly helpful for self-employed individuals utilizing a solo-401(k) or SEP IRA.

The employer match does not count against the 401(k) maximum contribution limit.

My answer is yes with a few stipulations.

For the you-only-live-once (YOLO) crowd who say you should live for today, spending all your paycheck isn’t what I’d call YOLO. Leave work for a while to do something fun.

Once you’ve got the fun out of your system, start to focus on saving.

If you have a decent job, income, and you save excess cash flow every month, I challenge you to start now. Max it out right away and adjust your spending to accommodate it. You’ll be glad you did in a few decades.

However, if you have any high-interest debt such as credit cards or payday loans (I hope not!), you should aggressively pay those off first.

Then, contribute up to where you’ll receive the match if there is one and work your way up to maximum contribution from there.

You’ll actually keep more of your earned money the more your contribute because you’ll pay less in taxes. When 15% is taken out pre-tax, your paycheck actually decreases by less than 15%.

I’ll show you what I mean.

I recommend that everyone heads over to Paycheck City to type your numbers into their salary calculator. Match the output against your pay stub so you know exactly where the deductions go.

I’m going to use a $75,000 salary in the state of Virginia as an example. I’m also using bi-weekly pay, filing status = single, and 0 for federal and state allowances.

This calculation is for an employer that caps the contribution at 15%. With that limit, it would take a salary of $126,666 to reach the maximum contribution limit. Most people are below that salary and would need to bump up their contributions above 15% to hit the maximum if allowed (next section).

Here’s what the calculator returns. The left side is no 401(k) contribution. The right side is a 15% paycheck pre-tax contribution. 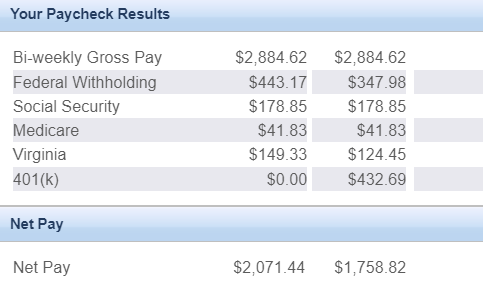 Bi-weekly Gross Pay is the same for both. That number is the salary divided by 26.

Making you that much wealthier at the end of the year (before investment returns).

These numbers will vary based on salary, withholdings, and other pre-tax deductions. That’s why I suggest trying your own numbers at Paycheck City.

The same employee above cannot reach the maximum limit of $20,500 by contributing 15% of salary every paycheck. If an employer allows a higher percentage of 401(k) contributions, then the employee can adjust the withholding upward to hit $20,500.

Here is that scenario compared to the previous: 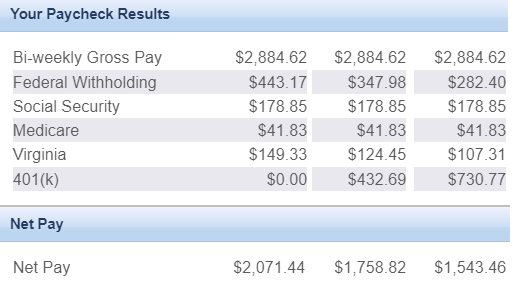 Making you that much wealthier at the end of the year (before investment returns).

Maxing out a 401(k) isn’t easy for someone that’s built their financial life around their take-home paycheck amount. So it’s highly encouraged for young people just starting their careers to do this immediately.

Mid-career, it’s more palatable to gradually increase the contribution amount every time you get a salary increase.

When you max out a 401(k), your take-home pay is less. Your paycheck may be several hundred dollars less. That sucks and may not be doable for some.

You have less to pay your bills, spend on things, and less money every paycheck to support yourself and your family.

Another is that your money is tied up in a retirement account and can’t be withdrawn without penalty until age 59 1/2 (with a few exceptions).

That’s seemingly bad too, but you still have the remaining paycheck amount to live off of. It’s a sacrifice you’ll need to make to reach your retirement goal and the most tax-efficient way to do it.  You’ll need money when you stop working. This is the best way.

Those are the only downsides that I can think of now. But they are big ones.

I took a salary cut when I started my current job because the benefits were so much better than my old employer.

This was evident in my latest quarterly income report. I have not had as much money to invest after tax.

Mrs. RBD has suggested we cut back on both 529 savings and 403(b) contributions to free up some money. But I refuse. I don’t want that regret again 15 years from now.

First of all, maxing out your 401(k) increases your income because you pay lower taxes. In our first example above, the worker would be $3,121.82 wealthier each year because of tax savings alone. And that’s not even the max!

Tax-deferred compounding is where the magic happens.

The money invested grows tax-deferred, meaning you won’t pay any taxes on the gains or dividends until you withdraw the money. That’s a sweet deal from the government.

Think of a retirement nest egg as the foundation of wealth.

If you only pay attention to what’s in your bank account, you won’t see your wealth grow. Tracking net worth is the best way to see the compounding effect of 401(k) and other retirement savings.

Another advantage of contributing to a 401(k) is there’s no temptation to spend the money. It’s gone away to a place where it can grow and prosper. Your money remains yours instead of becoming clutter.

Even if you can’t max out your 401(k), get started. Make pre-tax savings a habit. Increase the amount every year.

No matter how small, your employer should be able to have some kind of retirement plan. My previous employer started a 401(k) with just two employees. Encourage your employer to start one.

If they don’t, it may be worth finding another job.

You can always get similar benefits from investing in a traditional IRA. IRA limits are $6,500 for 2023. That’s still a good chunk of money to invest pre-tax and tax-deferred.

Self-employed individuals can open a solo 401(k) which allows you to contribute up to the defined contribution plan limit of $66,000 for 2023.

It’s a solid deal if your self-employment income is well above that.

Otherwise, if you’re employed and don’t have a plan, tell your employer your want one and invest in an IRA until then. 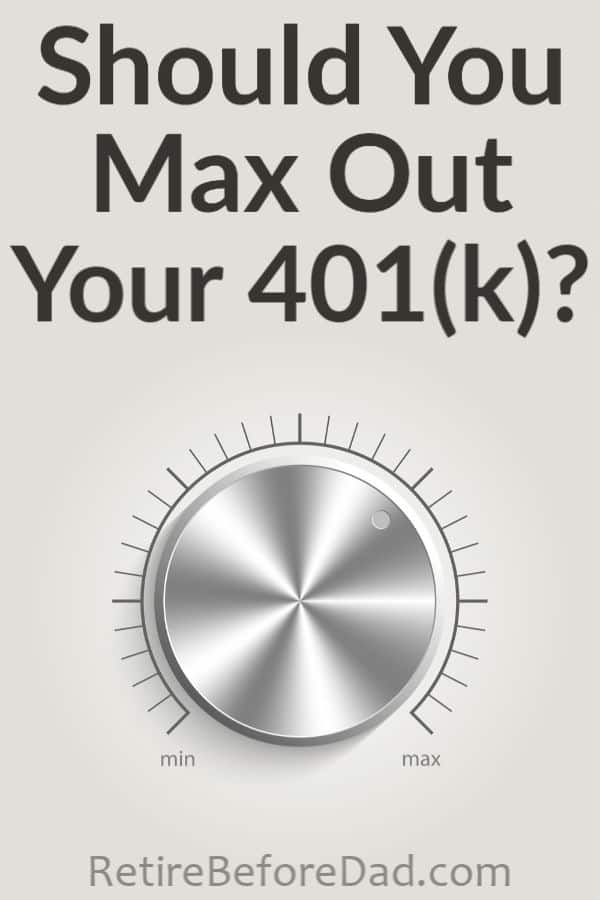 Image via DepositPhotos used under licence.