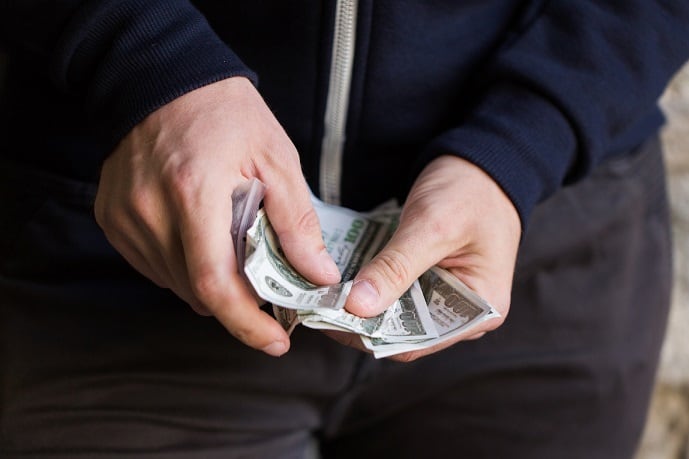 I’m grateful to work for a high-quality employer that appreciates my contributions and pays me a reliable paycheck 26 times a year.

The retirement plan is best I’ve seen anywhere. The healthcare plan is first-rate — our family never worries about coverage or costs.

It’s challenging work, and I occasionally even feel like I’m making a difference in the world.

But sometimes I question if full-time employment is right me today. Maybe I’d be better off if I never went back to work after losing my job in October 2017.

When I lost my job, I had enough savings and side business income to sustain our family for months, maybe a few years.

I used the opportunity to enjoy some time away from the office, spending more time being a Dad, and writing on my blog.

I purposely avoided starting a new job search to keep the focus on building my business income, hoping to increase that income stream before rejoining the traditional workforce.

During my ‘unemployment’ period, we broke even or worse every month. Family health insurance costs hurt the most. Our net worth stayed mostly flat, fluctuating some with the markets.

I disliked the lack of progress.

Two months after losing my job, I found an ideal position on LinkedIn. I applied and got the job within two months. It was the only application I submitted.

On the day I received the offer in writing, I was overcome by relief and laziness. Knowing there was a steady paycheck in my future diminished my drive to create.

A steady job with a good salary is supposed to be a coveted financial blessing and the key to achieving what many perceive to be the American Dream.

But at some point, the comfort of a salary might be holding you back from something bigger, like owning a business or extensive global leisure.

When you’re in the early wealth-building phase, growing your salary is the most effective way to accelerate earnings.

But mid-career, without ownership opportunities or a clear path to promotion, it’s easy to get stuck in a lackluster salary growth trajectory. Salary increases greater than 3%-5% become rarer for mid-to-late career employees as significant percentage increases become too costly for the employer.

To escape the salary ceiling, you can position yourself for a promotion (not always an option), find a new job, or start your own business.

Starting a business won’t increase your income in the short-term. But your earning potential is infinite.

A recent article over at Four Pillar Freedom about not earning a salary included the following quote which inspired the title for this post:

The three most harmful addictions are heroin, carbohydrates, and a monthly salary. — Nassim Nicholas Taleb, author of The Black Swan

A salary is like an unhealthy addiction when viewed through the lens of an entrepreneur. The safety and serenity of a steady salary might be holding us back from our greatest potential — or at least our ideal lifestyle.

I’m sure the above quote is all over Silicon Valley and the top business schools for entrepreneurs.

But those of us in pursuit of early retirement have a different mindset. We’re not desirous of the riches of entrepreneurship. We seek control and enough money and passive income to reclaim financial autonomy.

In this context, a salary is a dependable means to an end. Utilize the steady income to invest and grow assets to attain independence from full-time employment.

A new family moved into our neighborhood when I was about eight years old. The Dad opened a butcher shop and grocer nearby. He must have invested his life savings into the store and borrowed a bunch too.

When I first met the Dad, he caught me staring at his missing fingers. He beamed with pride as he offered me a closer look at his nubs, then proceeded to boast that losing only two finger parts was a good record for someone in the trade for as long as he was.

We didn’t shop there much, but I remember pig carcasses hanging from the ceiling in the back and the ubiquitous smell of blood throughout the store.

He was passionate about carving up animals for food and followed his passion into the depths of entrepreneurship. That’s what we’re supposed to do, right — follow our passion?

Looking back, I realize what an extraordinary risk he took, moving his family and opening a storefront on his own. He put everything on the line.

The business didn’t last. My neighbor, the butcher, closed up shop within five years, and the family moved away.

Imagine how stressful that period of his life must have been on his marriage and family. The journey into entrepreneurship is risky enough, let alone adding a family into the mix.

As someone who chose not to make my passion a full-time endeavor, I can relate.

Even with a relatively sizable financial backstop in October 2017, I was not willing to put everything on the line to become a full-time finance writer and blogger. It seemed too uncertain and stressful when I contemplated the idea as a sole breadwinner.

Full-time blogging was never my goal when I started writing. I needed a creative escape from my humdrum day job and hoped to earn a side income from my efforts.

My primary goal is to retire entirely before age 55. Since starting a family, I’ve felt that the most reliable and low-stress path to early retirement is a steady salary and benefits — coupled with saving and investing a large portion of what I earn to become financially independent over time.

This strategy is working, and I believe I’m now on the path of least resistance to reach my goal.

Before I had a family, I felt the same way. But I was shortsighted.

That’s when I should have more aggressively considered self-employment or entrepreneurship to amplify my wealth potential. I almost did.

Around the time I was getting serious about changing careers to become a financial planner, I bought my first home. I soon realized the purchase was a mistake when the suffocating mortgage payments crippled my lifestyle.

I could barely afford my home, let alone start my own business.

Then came the real estate and financial crisis, and the next decade of my life unfolded.

Had I avoided home ownership in 2006, things might have turned out differently — but the fear of failure held me back more than anything.

People tend to spend most of what they earn. It’s hard to believe, but 78% of Americans live paycheck to paycheck. That means that by putting aside a small amount of money each month, you’re out-saving 78% of the population.

That statistic may give you the warm fuzzies. But it’s not enough to build real wealth.

Even people with high salaries need to save and invest to be able to retire. A $200,000+ salary doesn’t mean much if there’s nothing left at the end of the month.

High-income earners tend to find uses for most of their income, be it a car payment, private school tuition, or a country club membership. The utility of income is relative to spending.

It’s not your earnings; it’s what portion of the earnings you save that determines your ability to grow wealth.

When you learn to live on less than what you make, you can retire with fewer assets so long as you maintain spending levels.

It all starts with a salary. Though not enough to build wealth alone, it’s a solid foundation and not an unhealthy addiction for most of us.

However, as you gradually accumulate assets and more significant income sources, unleashing you from reliance on a full-time employer, recognize that there may be more compelling opportunities waiting for you outside of the corporate office.

If you’re uncomfortable with the idea of giving up a salary but still desire something outside of your career, experiment on the side. Your boss will never know.